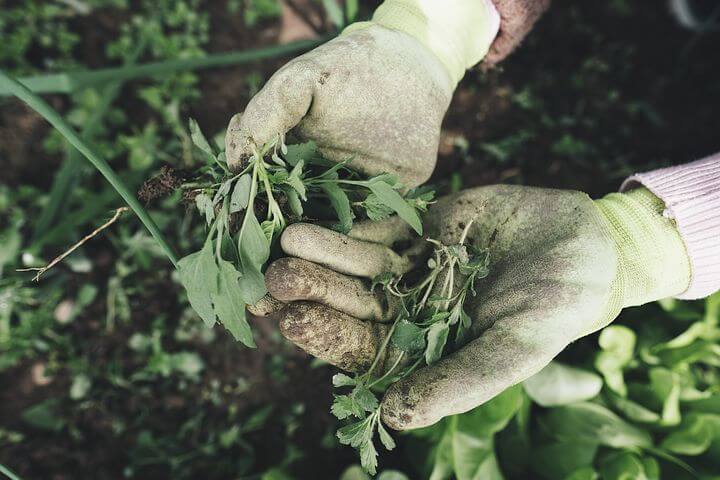 Gardening as a Coping Skill for Anxiety?

Gardening and yard work have been promoted as coping skills for a host of mental health conditions. Horticulture can reduce stress, lower blood pressure, and even restore cognitive functioning. The idea has merit, but probably not where anxiety is concerned.  Unfortunately, there are just too many what ifs that sprout up when it comes to gardening as a coping skill for anxiety.  Also, I’m pretty sure that my cognitive functioning is right on track for a speed racer without a seat belt – no need to improve that function on this team.

I bring up the gardening issue because it came knocking on my door recently.  One fine fall day, after a family hike, we happened to notice a strange feature in our tree.  In the midst of a game of backyard tackle, my husband stopped and pointed at the tree visible in our front yard.  “What do you think that is?” he asked, finger to the sky.  Wrong thing to say to someone with anxiety.  I immediately raced through escape strategies due to an instant theory that the CIA had come knocking because of our binge watching The Sopranos.  Once I realized I probably couldn’t scale the side of any building without pulling a muscle and comprehended the absence of helicopter blades and bullhorn messages, I stopped and really looked at where my husband was pointing.

First thought: plastic sack.  Second thought: alien inhabitants. I responded with a quick order for binoculars and fielded excited comments from my son.  With a sigh of relief, we realized it was a bag worm growth and not some kind of otherworldly invasion.  Then reality snapped in.  BAG WORMS?! Seriously? In MY tree?  Insert my son’s enthusiastic jumping because he apparently prayed to find a baby caterpillar on our hike and realized God answered his prayer times 1 million.  Sometimes it’s hard as a parent to encourage a prayer life when you understand the things your male child will probably pray for.  Why not ask for fat free swiss cake rolls that taste like the real thing??

Anyhoo, after numerous edgy entreaties from yours truly, my husband mapped out his plan for bag worm death 2019 the following morning.  We decided to commence operation worm ops at 0830, directly after the offspring was safely deposited on school grounds (much to his dismay at missing the circus). I gladly volunteered my services in the planning, preparation, and execution stages.  My husband loves my hands-on approach.

My husband has a no fear, everything is gonna be ok kind of demeanor.  Most of the time he is right.  Sometimes he overgeneralizes.  On this occasion, he may have “under thought” some of the specifics. I think I started to realize we were in a bit over our heads when he rolled out our 12 foot, fully extended ladder, set its feet in super stable gravel rocks, and plopped it against the tree trunk.  I watched him fashion a homemade tree branch cutting tool out of duct tape and PVC pipe before I stepped in with my imaginary horticulturalist degree.  He listened to me list all of the things that could go wrong with the plan very calmly, then started up the ladder following the same plan.  At that point, I figured I could best serve the common good by holding the ladder for him and having 911 on speed dial. 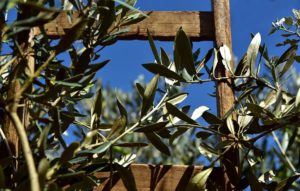 My husband is a little over 6 feet tall.  I throw this in here for 2 reasons: first, he likes it when I say he is over 6 feet tall.  Second, I know enough math to understand that a little over 6 feet plus a 12-foot ladder reach should get you to the top of just about any tree.   Apparently, I don’t really understand forestry. After climbing up the ladder and stepping onto a very tiny, flexible branch, my husband was still about 2 miles away from the stupid bag worm colony. He decided, with zero consultation from his knowledgeable spouse, that he would have to climb the tree.  Thus proceeded a mesmerizing dance of his throwing little, dead branches out of his path while I pointed out the way his foot placement was bending tree branches to the point of near-breaking. I’m pretty sure I even threw in a reference to a cartoon character who fell out of a tree because he thought he knew everything, but I really can’t remember all the details.

Once my husband was in reach of worm city, he launched his sawing campaign. At that point, he suggested I stop telling him what to do and move from my perch at the bottom of the tree to avoid being hit by a worm stampede. Reluctantly, I agreed and sauntered to a good vantage point about 10 feet away.  I made sure I was still in verbal coaching distance in order to correct his sawing technique and bolster his confidence.

After what seemed like 10 years of waiting, the branch finally started to wiggle.  I got more excited than a southerner at a butter sale.  I got so excited, in fact, that everything slowed down like it does in a car crash.  Suddenly I could see the branch falling, complete with one very well-fed caterpillar flailing out of the nest like a flying squirrel, directly at my face. I’m pretty he and I made eye contact.  I suppose he saw the writing on the wall and figured he would be the lucky recipient of my son’s adoration and love if he could just get to the decision maker. Or maybe his survival instincts kicked in and he abandoned ship.  Either way, his approach action caused an equal and opposite reaction in me.  Instantaneously, time sped up and I thrashed my way out of the danger zone with blood chilling screams and full-fledged panic. One minute, I was standing in our driveway, and the next I had levitated to our porch without touching the ground.

From his perch in the tree, my ever-peaceful husband identified that I should probably pick the branch up and throw it in the truck before the worms exploded off of it and made permanent homes in our yard.  I promptly advised him to shimmy his happy self down the tree and take care of it.  I did offer to help out by throwing a very heavy rock in the direction of the rogue caterpillar that tried to attack me earlier in the game.

In the end, we got the whole tree branch out of the yard before any invading marauders were able to become squatters.  I say “we” because I supervised from inside the front door.  By that time, I couldn’t stop squirming and twitching out of fear that one of those sneaky hooligans had hidden in my hair.  My husband did inform me that my aim must be pretty good, as the escapee appeared to have been stopped dead in his tracks. That one was hard to explain to my son later.

It Turns Out Gardening is Not a Coping Skill

The takeaway from this experience for me was to avoid gardening as a coping skill for anxiety at all costs.  The fact that unwanted creatures can establish a home base in my plants was enough to convert me. I don’t care about the smell of dirt, I don’t care about the health benefits of growing your own food, and I really don’t care about organic values.  At this point, I’m just glad I escaped in one piece.  I’m also incredibly grateful for heavy rocks and neighbors that mind their own business when the circus is in town.