We All Have Some Simon in Our Peter Peter is one of my all time favorites in the Bible – not because he was the “rock” on which Jesus built His church, but because he was an erratic, passionate, fearfully brash lover of Christ.

Who could have been a better example than Peter of how Jesus meets us where we are and sees a future full of hope and goodness?

Who but Peter could have better demonstrated the never-ending, never-failing mercy and love of God?

I have been following a study of Peter before he was “Peter.” Before he became the steadfast, soul-preaching, dependable preacher we all know him to be today.  I’ve been meditating on and thinking about SIMON.

Simon was reckless.  He knew everything.  He was full of self-doubt and then conviction the next second, with a sprinkling of overzealous “I’m going to save the world” panache. He was flashy in the way he loved Jesus – and impulsive.  He was equal parts mind-bending faith and terrorizing fear.

But something we rarely remember is that Simon was also Peter.

The best Bible story about Peter is when Jesus appeared to Mary Magdalene and Mary, His mother, after being raised from the dead.

He knew Peter had denied Him – not once, but over and over – to save his own skin.

He knew Peter had left Him alone to face a horrendous, torturous death that He did not deserve.

He knew Peter had run in terror and doubt.

Two words that show the bottomless, self-sacrificial love of my Jesus:  “and Peter.”

Every time I read this story my heart bursts with the knowledge that Jesus made sure someone would give a special message to Peter that he was loved, treasured, and saved.

That’s the kind of love that changes lives. 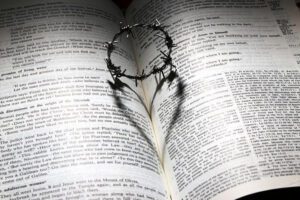